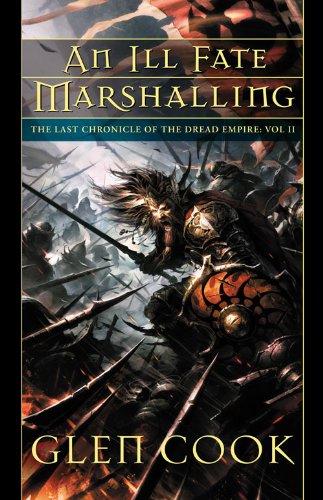 King Bragi Ragnorson decides to join Chatelain Mist’s coup against the Dread Empire. Varhlokkur  the King’s wizard  tries to dissuade Ragnorson from this chosen path, but only the drum-beat of war is heard. The King’s Spymaster Michael Trebilcock joins with the wizard to stave off The Ill Fate Marshaling, to no effect. Many of the characters from past volumes take center stage, and the climatic events of this book shake the world of the Dread Empire to its very core, creating A Path to Coldness of Heart. Glen Cook’s final Dread Empire novel was to have been published 20 years ago, but the manuscript was stolen, and the fate of The Dread Empire has been in Limbo  until now! Night Shade is proud to present the long delayed final Dread Empire Trilogy, of which An Ill Fate Marshaling is Volume 2. Skyhorse Publishing, under our Night Shade and Talos imprints, is proud to publish a broad range of titles for readers interested in science fiction (space opera, time travel, hard SF, alien invasion, near-future dystopia), fantasy (grimdark, sword and sorcery, contemporary urban fantasy, steampunk, alternative history), and horror (zombies, vampires, and the occult and supernatural), and much more. While not every title we publish becomes a New York Times bestseller, a national bestseller, or a Hugo or Nebula award-winner, we are committed to publishing quality books from a diverse group of authors.
Show More
Reviews

Disclaimer: The price shown above includes all applicable taxes and fees. The information provided above is for reference purposes only. Products may go out of stock and delivery estimates may change at any time. Desertcart does not validate any claims made in the product descriptions above. For additional information, please contact the manufacturer or desertcart customer service. While desertcart makes reasonable efforts to only show products available in your country, some items may be cancelled if they are prohibited for import in Costa Rica. For more details, please visit our Support Page.